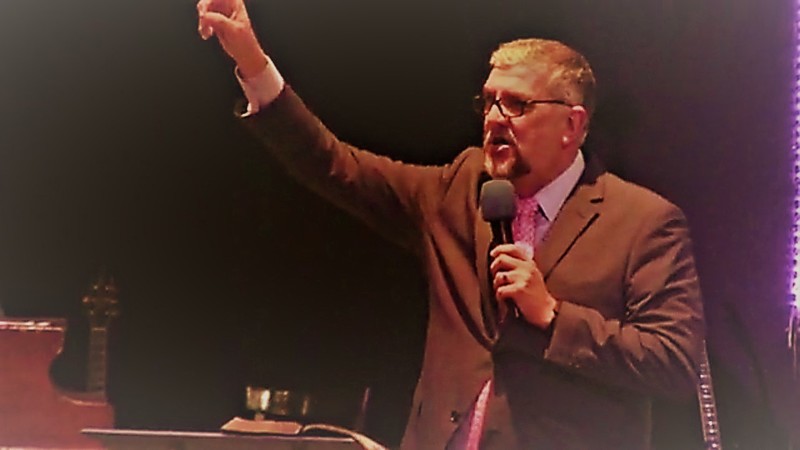 Ephesians 4: 8 Wherefore he saith, When he ascended up on high, he led captivity captive, and gave gifts unto men. 9 (Now that he ascended, what is it but that he also descended first into the lower parts of the earth? 10 He that descended is the same also that ascended up far above all heavens, that he might fill all things.)

· Many people have lived a lot longer then Jesus lived.

* Nobody has ever come close to having the impact Jesus had.

· God demanded that the debt be paid.

· God made a way that once a year a sin payment could be made.

· This yearly sacrifice was really an “interest only payment”.

· This paid the interest on the debt but the principle was never paid in full. · Lamb, turtledove, bullock what ever it was would be sacrificed and that blood would run and the Priest would say.

· The sin debt was never being rolled away. The debt would remain the same.

· There came a day when God almighty said I’m tired of only receiving the interest I want it to be paid in full and The Blood of Jesus did so.   What about all those people who died before that debt was paid?   The Bible teaches us that there was a place in the heart of the Earth called Paradise.

Luke 16: 20 And there was a certain beggar named Lazarus, which was laid at his gate, full of sores, 21 And desiring to be fed with the crumbs which fell from the rich man’s table: moreover the dogs came and licked his sores. 22 And it came to pass, that the beggar died, and was carried by the angels into Abraham’s bosom: the rich man also died, and was buried; 23 And in hell he lift up his eyes, being in torments, and seeth Abraham afar off, and Lazarus in his bosom. 24 And he cried and said, Father Abraham, have mercy on me, and send Lazarus, that he may dip the tip of his finger in water, and cool my tongue; for I am tormented in this flame. 25 But Abraham said, Son, remember that thou in thy lifetime receivedst thy good things, and likewise Lazarus evil things: but now he is comforted, and thou art tormented. 26  And beside all this, between us and you there is a great gulf fixed: so that they which would pass from hence to you cannot; neither can they pass to us, that would come from thence.

· Jesus told the story of how Lazarus would lay and beg from the table of the rich man. · The dogs would come and lick his sores. · Jesus went on to tell how Lazarus died and the rich man died. · When Lazarus died he was comforted in Abraham’s bosom. · The rich man died and lifted his eyes in hell. · The rich man began to cry and said, “Father Abraham, would just send Lazarus to dip his hand in water to cool my tongue for I am tormented in the flame.” · Abraham said, “no and besides there is a great gulf fixed so that no one can pass from here to there.”

He received them when Adam and Eve sinned along with the keys to death because after sin it was appointed unto man once to day.   I want us to take an imaginary journey today and think about this place called Paradise and everyone through the thousands of years who may have been there. · The first person there was no doubt Able. Whom the Lord accepted his sacrifice, but he was murdered by his brother Cain. · Keep in mind that Adam lived to be over 900 years old and Able was probably there by himself for many years. · When Adam showed up and can imagine a nice reunion between father and son. · I’m sure Able showed him around and one day probably said to his dad, “Dad, this place is nice but there is a door that is locked and we are incarcerated here.” · “When you were alive was there any indication of how long we would be here.” · I’m sure Adam said, “well son, I don’t know if this will help but a long time ago, even before you were born, when we sinned in the garden. ·

Genesis 3: 15 And I will put enmity between thee and the woman, and between thy seed and her seed; it shall bruise thy head, and thou shalt bruise his heel.   I like to imagine that as years went by one day somebody came to Paradise and those there ran up to them and said, “Who are You?” · Maybe it was Job. They ask him, Can anybody get us out of here?

Job 19:25 For I know that my redeemer liveth, and that he shall stand at the latter day upon the earth: 26 And though after my skin worms destroy this body, yet in my flesh shall I see God: 27 Whom I shall see for myself, and mine eyes shall behold, and not another; though my reins be consumed within me.     Maybe Isaiah showed up. They said, “who are you?” “Do you know anything?” ….Let me tell you what I know, ·

Isaiah 9: 6 For unto us a child is born, unto us a son is given: and the government shall be upon his shoulder: and his name shall be called Wonderful, Counsellor, The mighty God, The everlasting Father, The Prince of Peace. ·

Isaiah 53: 5 But he was wounded for our transgressions, he was bruised for our iniquities: the chastisement of our peace was upon him; and with his stripes we are healed.   One day an old preacher showed up. His steps were slow. Somebody ran up to him, “ Who are you?” It was Simeon the Priest. · He said, “Let me tell you what I know.” · One day I saw Mary and Joseph bring a little baby wrapped in swaddling cloths and when I held him there was something that was different about that little boy. ·

Luke 2:28 Then took he him up in his arms, and blessed God, and said, 29 Lord, now lettest thou thy servant depart in peace, according to thy word: 30 For mine eyes have seen thy salvation, 31 Which thou hast prepared before the face of all people; 32 A light to lighten the Gentiles, and the glory of thy people Israel. Someone said, “You mean to tell us he’s been born?” “He’s on Earth?” “Right Now?” You talk about a ripple effect as the word begin to spread throughout Paradise.   After a while a man dressed in Camels hair comes in rubbing his neck. Who are you? Well, I’m John. Did you ever cross paths with him? · I leaped in my mother’s womb when the word came that the Messiah was coming. · He showed up at one of my Baptisms and when I baptized him

· John 3: 22 And the Holy Ghost descended in a bodily shape like a dove upon him, and a voice came from heaven, which said, Thou art my beloved Son; in thee I am well pleased. · I’m not worthy to even untie his shoes. · When I was in prison, I sent my disciples to ask Jesus “Are you really the Messiah?” “or should we look for another?” · They found him and ask him and he replied with no words but touched the crippled – blind – deaf – raised the dead – the he said, “Now go tell him what you see.” · When I heard that I knew and had no doubts.     One day old Lazarus showed up. · 4 days he was there. · Sharing how he knew this Jesus and walked with him. · Talked with him · Saw his miracles and was his friend. · Then all the sudden he said , “boys I’ve got to go, I hear him calling me now.”   One day this rough guy showed up. · Looking around. · Not sure of himself. · Someone said, “who are you?” · He may might of said, I’m a loser. An old good for nothing. · Have I heard of him? I JUST Left HIM. · He said today thou shall be with me in Paradise. The ripple began to affect Paradise again as word spread He’s coming! He’s coming! Then all the sudden there was a thump and a wind that begin to blow and a light that begin to shine as with each step the ground shook and the Earth trembled and there appeared the Son of God. He showed up at the keeper of the gate and reached out his nail scared hand and said, “Give me the keys!” Satan was to busy celebrating the deemed victory. Oh the thrill of Victory and the Agony of defeat.

Ephesians 4:8 (Contemporary English Version) 8As the Scriptures say, "When he went up to the highest place, he led away many prisoners and gave gifts to people."

Ephesians 4:8 (New Living Translation) 8 That is why the Scriptures say, "When he ascended to the heights, he led a crowd of captives and gave gifts to his people." He rose from the dead, defeated Death, Hell and the Grave.

Matthew 27: 51 And, behold, the veil of the temple was rent in twain from the top to the bottom; and the earth did quake, and the rocks rent; 52 And the graves were opened; and many bodies of the saints which slept arose, 53 And came out of the graves after his resurrection, and went into the holy city, and appeared unto many.

*New Living Translation Matthew 27: 51 At that moment the curtain in the Temple was torn in two, from top to bottom. The earth shook, rocks split apart, 52 and tombs opened. The bodies of many godly men and women who had died were raised from the dead 53 after Jesus’ resurrection. They left the cemetery, went into the holy city of Jerusalem, and appeared to many people. He’s here to lead captivity captive.