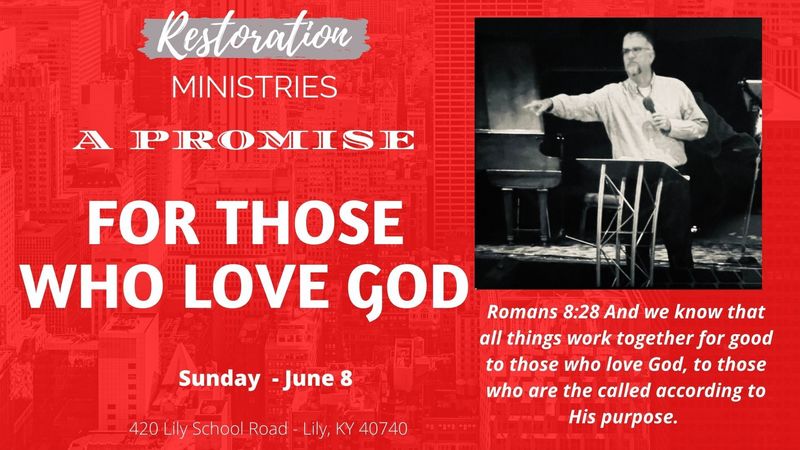 A promise for those who love the Lord.   Romans 8:26 Likewise the Spirit also helps in our weaknesses. For we do not know what we should pray for as we ought, but the Spirit Himself makes intercession for us with groanings which cannot be uttered.  27 Now He who searches the hearts knows what the mind of the Spirit is, because He makes intercession for the saints according to the will of God. 28 And we know that all things work together for good to those who love God, to those who are the called according to His purpose.

Read “It is good” illustration.

All things… really? Proverbs 11:3 The eyes of the Lord are in every place, Keeping watch on the evil and the good.

Romans 8:28 And we know that all things work together for good to those who love God, to those who are the called according to His purpose.    ·      Do you love God?  Serve God. Communicate with God. ·      Or is God just your personal genie bottle you only take off the shelf when you’ve messed life up so bad, you have no other chose?

The Jews had 612 manufactured commandments; each law based on each letter on the ten commandments.  ·      There were an additional 357 commandments from the first five books of the Bible. ·      And another 255 based on the teachings of the prophets. ·      Some pharisees came to Jesus and asked which of the 1,224 commandments were most important. ·

John 14: 21 He who has My commandments and keeps them, it is he who loves Me. And he who loves Me will be loved by My Father, and I will love him and manifest Myself to him.”

Romans 8:28 And we know that all things work together for good to those who love God, to those who are the called according to His purpose.  ·

You want all things to work In your life? LOVE HIM!

-       The smallest child in this room is one step closer to death then when they woke up this morning.

And He promises in Romans 8:28 And we know that all things work together for good to those who love God, to those who are the called according to His purpose.

-       Not what you think your purpose should be, But what HIS purpose is for you!

John 16: 31 Jesus answered them, “Do you now believe?  32 Indeed the hour is coming, yes, has now come, that you will be scattered, each to his own, and will leave Me alone. And yet I am not alone, because the Father is with Me.  33 These things I have spoken to you, that in Me you may have peace. In the world you will have tribulation; but be of good cheer, I have overcome the world.”

Romans 8:31 What then shall we say to these things? If God is for us, who can be against us?

”It is good” illustration There was a king in Africa who had a faithful servant with a positive attitude about everything that occurred in life. Whether it was good or bad he would always remark, “This is good.”   One day the king and his servant were out on a hunting expedition. The servant would load and prepare the guns for the king. The servant had apparently done something wrong in preparing one of the guns, for after taking the gun from his servant, the king fired it and his thumb was blown off. Examining the situation, the servant remarked as usual, "This is good!"   Angrily the king replied, "No, this is not good!" and proceeded to send his friend to jail. About three years later, the king was hunting in an area unaware of the cannibals around him. The cannibals captured him and took him to their village. They tied his hands, stacked some wood, set up a stake and bound him to the stake.   As they came near to set fire to the wood, they noticed that the king was missing a thumb. Being superstitious, they never ate anyone who was less than whole. So untying the king, they sent him on his way.   As he returned home, he was reminded of the event that had taken his thumb and felt remorse for his treatment of his servant. He went immediately to the jail to speak with him.   "You were right," he said, "it was good that my thumb was blown off." And he proceeded to tell the servant all that had just happened. "And so, I am very sorry for sending you to jail for so long. It was bad for me to do this." "No," his servant replied, "This is good!" "What do you mean, ‘This is good’? How could it be good that I sent you to jail for three years?" "Because if I had not been in jail, I would have been with you. And I am whole. This is good"